Interleukins are cytokines that act as immunomodulatory agents and are implicated in a variety of autoimmune inflammatory diseases. Interleukin-23 (IL-23), considered to be involved in the differentiation of T helper type 17 cells, is a principal molecule in autoimmunity and is an important drug target molecule for the treatment of many auto immune inflammatory diseases.

IL-23 binds to IL-23 receptors (IL-23R) thus triggering a cascade of signalling events that culminate in activating the target genes. IL-23 receptors expressed on T cells, natural killer cells, monocytes and dendritic cells are made up of α subunits and β1 subunits.

As can be seen from the following figure, the wild type IL-23Rα is a transmembrane protein having 629 amino acids, the protein comprising an extracellular domain (1-353 aa), transmembrane domain (354-376 aa) and a cytoplasmic domain (377-629 aa).  The N-terminus of the extracellular domain has a signal peptide (1-23 aa) and a fibronectin-III like domain. The cytoplasmic domain has three potential tyrosine phosphorylation sites.

One of the alternative splice form Δ 9 of IL-23Rα without exon 9 has only 348 aa and lacks the transmembrane domain and the cytoplasmic domain that are found in the wild type IL-23Rα. The Δ9 mRNA represents almost 20% of IL-23Rα transcripts in human leucocytes and is a major form of IL-23Rα mRNA.

Another alternative splice form Δ 8, 9 of IL-23Rα without exons 8 and 9 has only 318 aa and also lacks the transmembrane and the cytoplasmic domains. During alternative splicing in Δ 9 and Δ 8, 9 variants, there is a shift of open reading frames that results in premature termination and a unique 8 amino acid sequence GLKEGSYC is formed at the C-terminus. Both Δ 9 and Δ 8, 9 variants of IL-23Rα are believed to be secreted proteins. 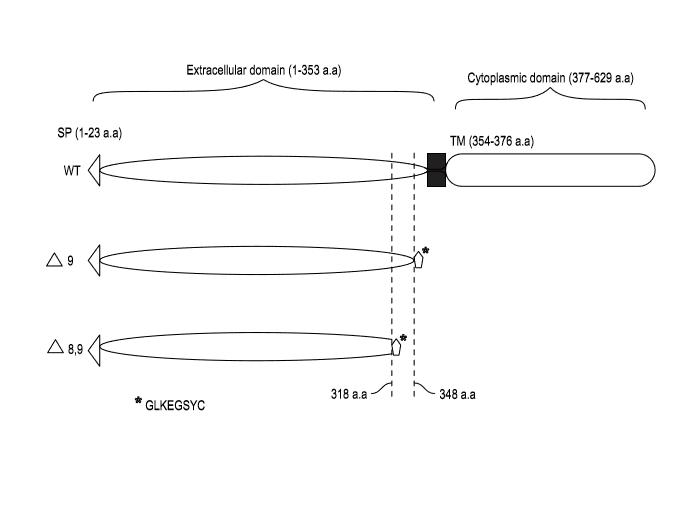 A US patent 9,523,073 granted on Dec 20, 2016 has claimed methods for serological detection of naturally-occurring soluble truncated variants of α subunit of IL-23 receptor for diagnosing autoimmune diseases including Crohn’s disease.

As seen in the figure given below, a sandwich ELISA system was disclosed for detecting and quantifying the Δ 9 variant of IL-23Rα present in biological samples. The sample, preferably EDTA treated plasma, was incubated in a 96 well microtiter plate coated with capture reagents, preferably at about 40C for about 3 hours at a  pH of about 9.5. The capture reagents could be antibodies against human IL-23R, IL-23R binding peptide-Fc fusion protein or IL-23 p19 subunit-Fc fusion protein. Detection antibodies that recognize a distinct epitope from the capture antibodies were then added to the system. In a particular embodiment, biotinylated antibodies for human IL-23R were used as detection antibodies that was tagged with Streptavidin conjugated with an enzyme reporter. A suitable substrate for the enzyme reporter was subsequently added and then the color intensity was measured for detection and quantification of the Δ 9 variant of IL-23Rα to diagnose Crohn’s disease. 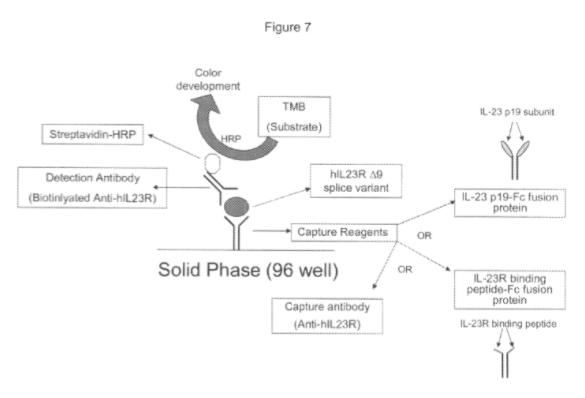 Other than Crohn’s disease, this system might be useful for diagnosing ulcerative colitis, asthma and other autoimmune inflammatory diseases characterised by increased T helper type 17 cell activity.

previous
Filing of Application for a Patent (Indian Patent Office)
next
Bayer group acquires yet another patent on compositions comprising Fluopyram
+91 94937 86003
contact@prometheusip.com
www.prometheusip.com